I really love the original recipe, but I decided to try and do a lower calorie (and Weight Watchers friendly) version of the classic raspberry vanilla yogurt fluff recipe.

What is this raspberry vanilla yogurt concoction???

Well, it’s the easiest stuff on the planet – cool whip, vanilla yogurt, vanilla pudding mix, and raspberries all mixed together. It forms a fluffy, creamy dessert that’s light yet sweet and satisfying.

I’ve seen a lot of different variations on this – some use cottage cheese (to cut the sweetness) others add in marshmallows! I personally prefer the way I make it.

Since I’m currently following Weight Watchers I wanted to try something with less sugar and lower calories to dial down the points a bit. What I came up with is super easy and still pretty delicious.

… the last ingredient is obviously raspberries but that stays the same! You can use fresh or frozen (unsweetened).

My version is the lowest point (and calorie based on your tastes. If you don’t want to use sugar free vanilla pudding, you can totally use regular just keep in mind it will have an effect on points (and calories). I will admit it tastes better with regular pudding vs. sugar free, but it does cut down on the points.

This is super easy to make – all you do is first mix together the yogurt and pudding mix in a bowl (mix well!) Then, fold in the cool whip and raspberries. Viola!

You can eat it immediately, or let it set up in the fridge for a bit. The longer it sets, the more raspberry flavor and juice that will seep into the salad. It tastes good both ways but if you want the entire pudding mixture to take on a raspberry flavor you’ll need to let it set for a few hours (or overnight).

You also don’t have to use Greek yogurt – you may prefer to use regular light yogurt and it will give it a lighter texture. Greek yogurt makes it quite a bit thicker (which I personally prefer).

You’ll want to eat this right away (or freeze)

This dessert is great for taking to a party or if you’re going to have a lot of people eating it up, because like most cool-whip based desserts, it just doesn’t really keep well. If it goes longer than 2 days in the fridge it gets a little bit… weird.

What I do is freeze portions in freezer safe containers so I can pull them out and thaw whenever I feel like it. You can eat it frozen, but I think it tastes better thawed out a bit. 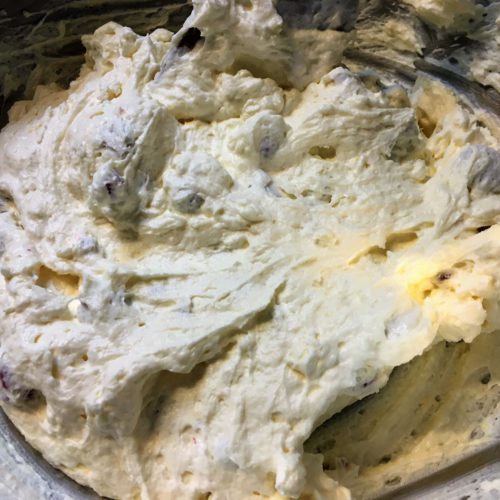 I am basing this off of the recipe making 8 servings, but yours could be more, or less, depending on how you portion it out.

I bet this would also taste really good with white chocolate pudding mix too! I haven’t tried it yet though, but I just might.

Have you tried this (or any other version)? Can you think of any better substitutions? Let me know your thoughts in the comments below!